But one question remains: how will it smell?
An ironic blast of pop-corn accord quickly met by a powdery blend of Iris and Gunpowder and brought to a subdued ending by Sandalwood. 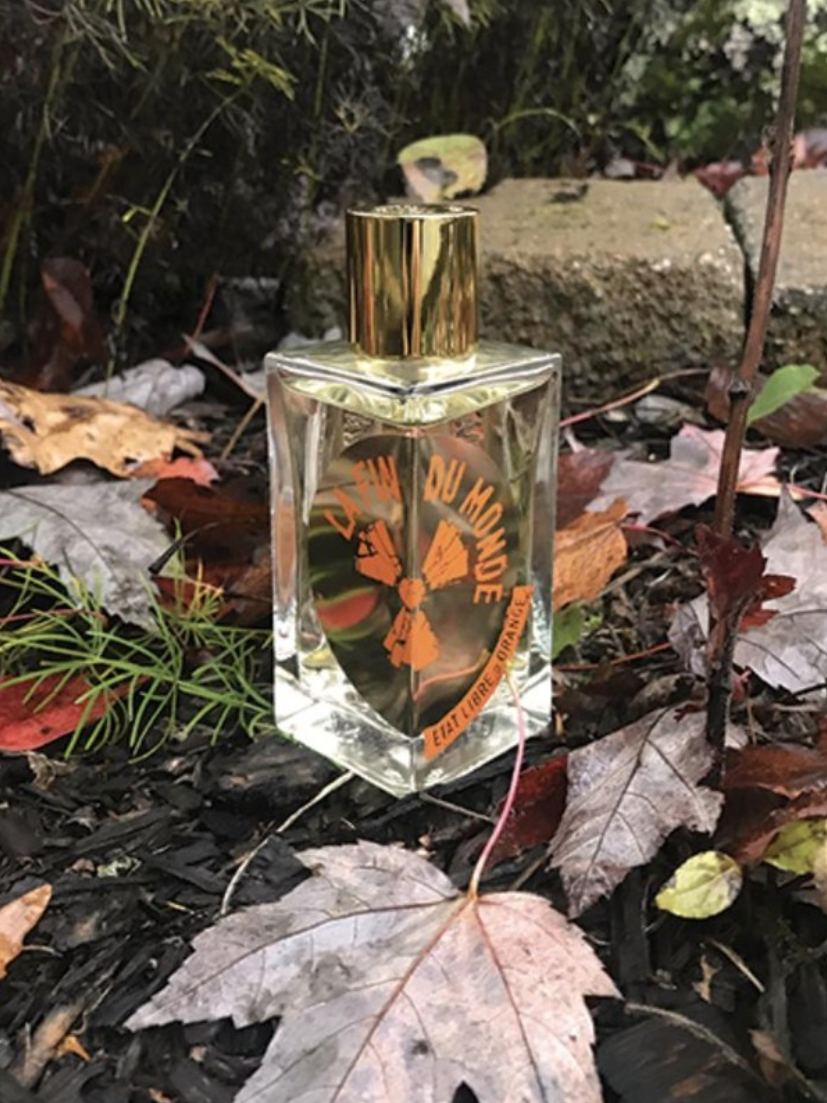 Peek at the excerpts of interviews with Quentin Bisch and Étienne de Swardt, plus Laughing at the Face of the Apocalypse Draw. Compiled by Despina Veneti, Senior Editor.

There is a deeply gratifying sense of relief in having just watched a film dealing with “the end of the world”. In times of global pandemic, I’m well aware that a healthy dose of uncomplicated, feel-good entertainment is sometimes just what the doctor ordered. Nonetheless, more than cinematic distractions oozing with right-in-your-face positivity, I currently find myself reaching for films that present a variety of pre/post-apocalyptic visions.

Because they enhance my realization that, no matter how dire things may be, they could be much, MUCH worse! It’s that comforting feeling that, as mankind, we’re not quite THERE yet – “there” being a straightforward hostile Alien invasion (“War Of The Worlds”, “Independence Day”, “Edge of Tomorrow”) or a sneakier one, attempting to rob humankind of its humanity (“Invaders from Mars”, “I Married a Monster from Outer Space”, “Invasion of the Body Snatchers”); a frantic race against time to avoid a collision with a star/comet or keep Earth in orbit (“When Worlds Collide”, “The Day the Earth Caught Fire”, “Armageddon”); an urban dystopia driven by suppressing human (and android) rights (“Blade Runner”, “Mad Max”, “A. I.”); a nightmarish world due to a nuclear/ecological disaster (“Day the World Ended”, “Planet of the Apes”, “The Day After Tomorrow”) or overpopulation/food shortage (“Soylent Green”, “Logan’s Run”, “Delicatessen”); a horrible plague that left humankind infertile (“The Handmaid’s Tale”, “Children of Men”); fellow humans turned into zombies  (“The Last Man on Earth”, “Night of the Living Dead”, ”28 Days Later”); or traveling back in time in a final attempt to save mankind (“La Jetée”, “Terminator 2”, “12 Monkeys”). My personal preference is for films that deal with the threat of imminent doom (sometimes averted at a heavy cost, sometimes not at all), like “On The Beach” (1959), “Fail Safe” (1964) and especially “Dr. Strangelove Or: How I Learned to Stop Worrying and Love the Bomb” (1964). The latter is my favorite of them all, for its brilliant, utterly hilarious satire of the world’s nuclear “balance of terror”. Stanley Kubrick based the film on the events described in the 1958 suspenseful novel “Red Alert” by Peter George (published under the pseudonym Peter Bryant), a solemn, straightforward account of a nuclear war about to start. The director was initially planning to film it as a serious, dramatic thriller – until the absurdity of the ease with which such a catastrophe could be triggered gave him the ingenious idea to make a black comedy out of it, add the eponymous character of the ex-Nazi doctor, and have the world go in a blast, while Vera Lynn sings her WWII hit “We’ll Meet Again".

Humor can save our sanity, and such is the feeling I get from État Libre d’Orange's La Fin Du Monde, a delightfully quirky fragrance of comical spirit, explosive optimism and beautiful ingredients. An ideal companion for my daily home cinema ritual: great-smelling and calorie-free.

État Libre d’Orange's La Fin Du Monde opens with a real “pop”, an aromatic blast of its central popcorn accord which, at this stage, is savory and warm, with a pinch of salt and a generous sprinkle of black pepper. A rather distant whiff of sweetness kicks in shortly: it feels like the cinemagoers sitting near you have ordered their popcorn caramelised – or could it be coming from the candy sold in the theatre foyer? The movie starts, and there’s plenty of action: a gunpowder accord attracts your attention with its metallic, smoky undertones, blending in with your popcorn – but you need not worry, it won’t overpower the aromatic experience of your snack. Now, what’s a film without romance? 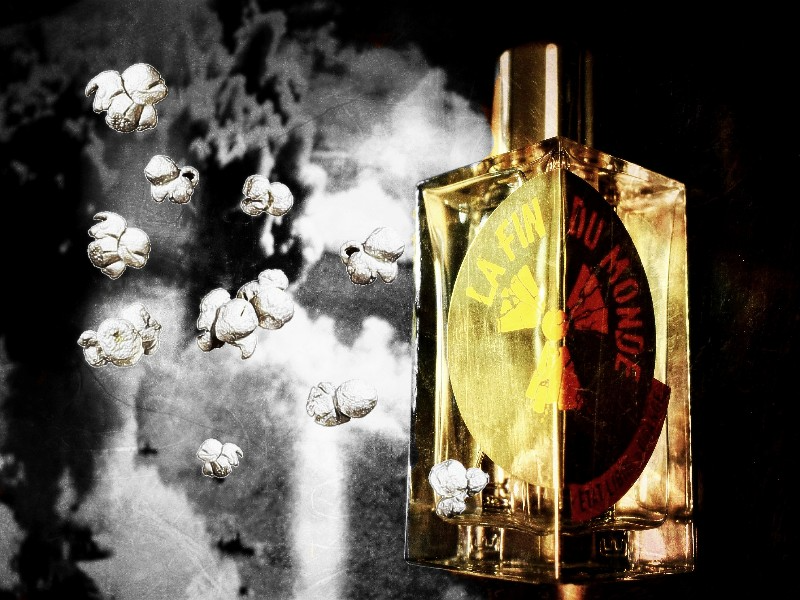 When the deceptively gentle Miss Iris enters the scene, make no mistake: she’s there to star, to captivate. The delicately airy freesia accents give her youthfulness, however she is no shy ingénue; her intrinsic rootiness, powederiness and buttery warmth are enhanced by the cornucopia of seeds (carrot, sesame, ambrette), the electrifying energy of cumin and the creaminess of sandalwood, emanating self-assured elegance and sophistication. She’ll find her match in spicy, appetizing Mr. Popcorn, who compliments her perfectly; together, they’ll eventually overcome the dark forces of Gunpowder, and work their blissful magic during the long drydown of their existence… 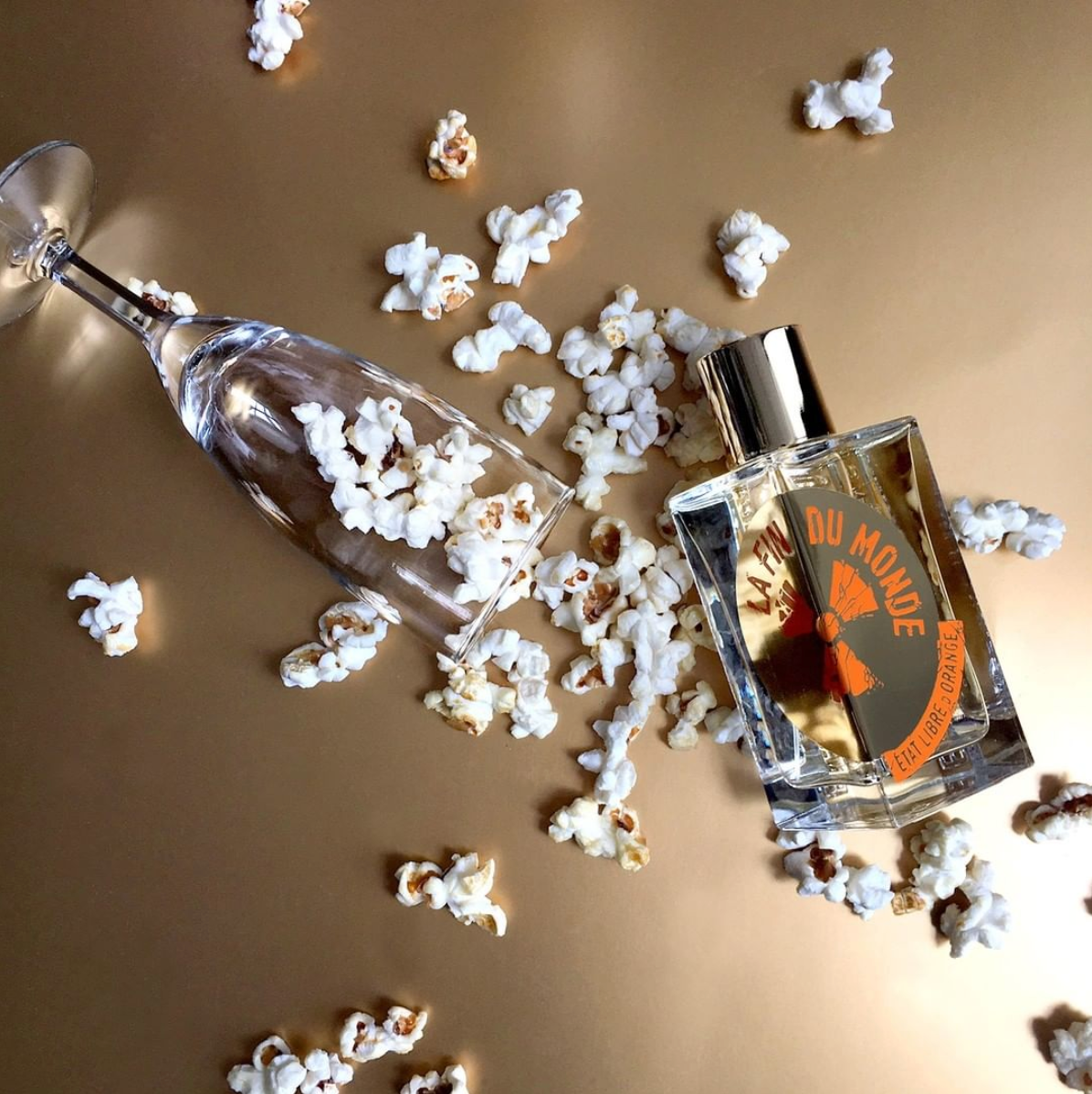 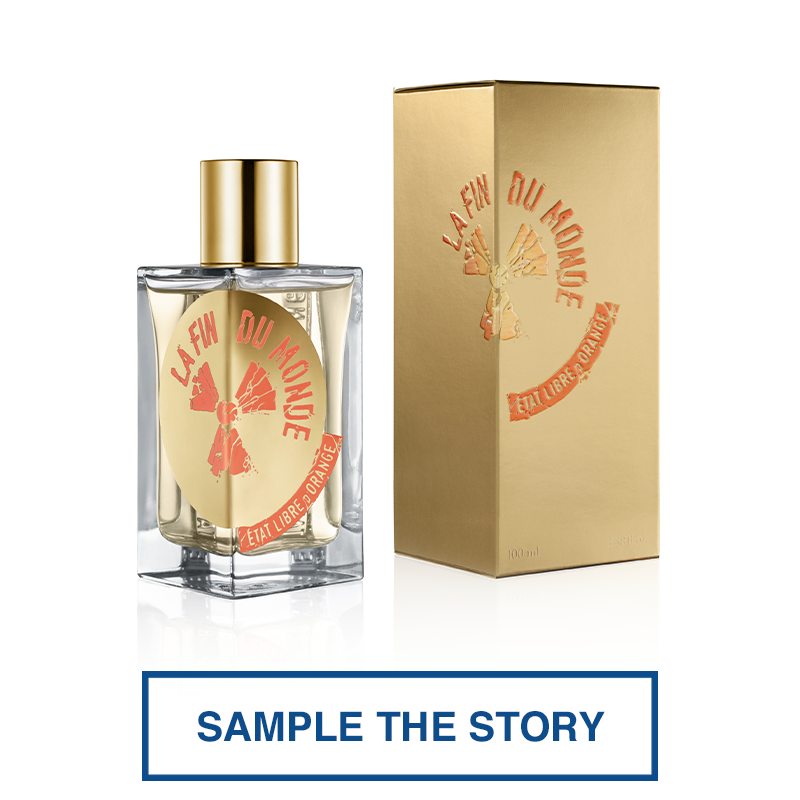 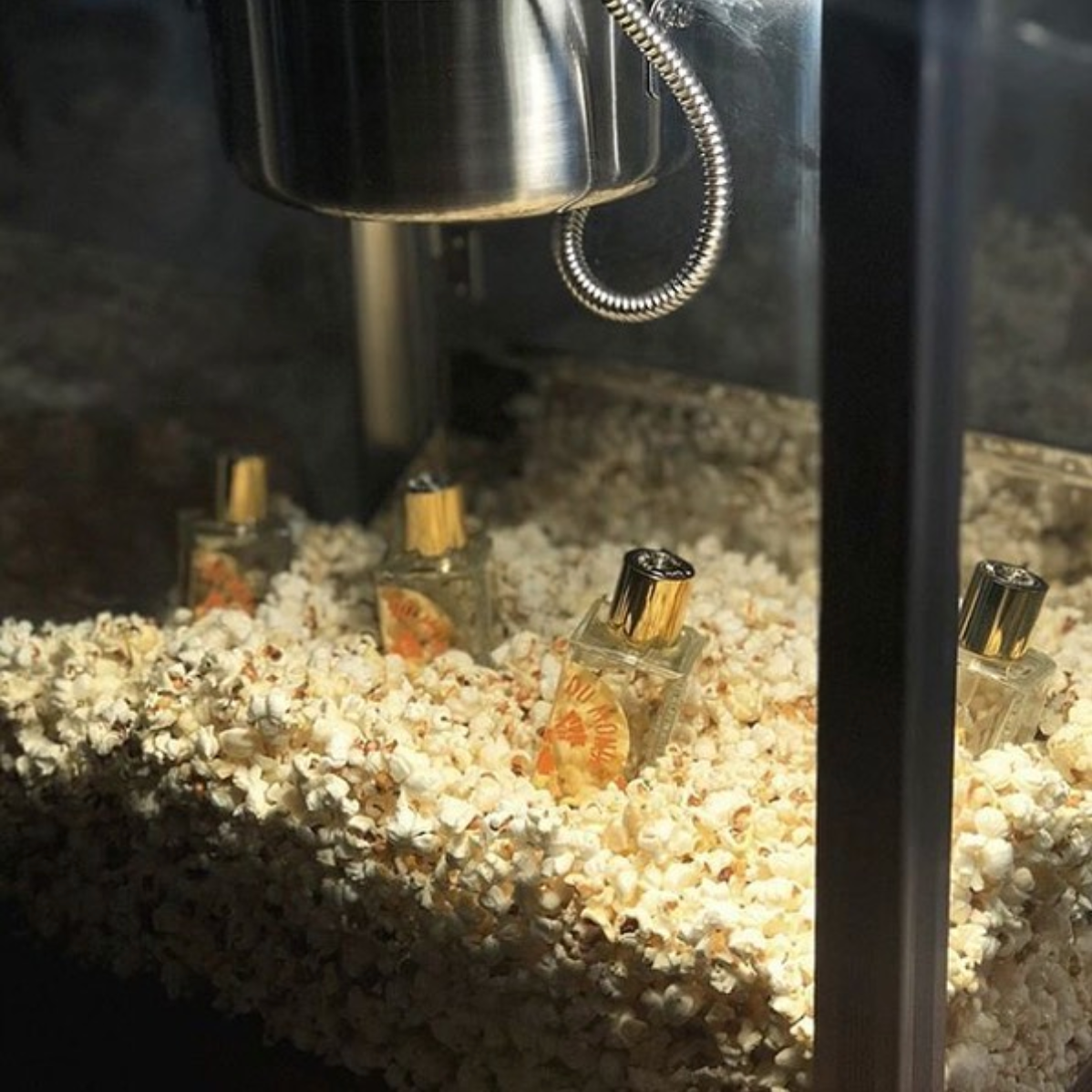